I've been having some problems with the ex-Merc 16P/3 (17P/3) calipers I managed to source for my car, with the hydraulic hose banjo fitting refusing to seal allowing a slight weep from the union.  I've tried all sorts of copper crush washers - different sizes, different makes, and what has become apparent is that they are not the same as they used to be (surprise, surprise).  The copper alloy is different these days, it seems, and many manufacturers do not sell annealed washers.  All this makes life harder (not to mention the washers), but the main problem I had was that bizarrely the calipers I have had not been machined flat at the union to take a banjo fitting.  I say bizarrely, because any references I can find to 230SL etc. applications for these calipers show a banjo fitting.  I had attempted filing or smoothing the fit surface as best as I could but the problem persisted.

I was considering taking them to a machine shop, but couldn't see easily what they could do to help.  Clearly the new machined surface had to be cut very accurately at 90˚ to the threaded hole for the banjo bolt or a seal would be impossible.  A chance chat with Barry at Martin and Kate's excellent post-Italian Job dinner pointed me in the right direction.  Barry suggested using a counterbore, which I had worked out myself, but couldn't see how to do this without damaging the thread in the union hole.  Barry's suggestion was to make up a sleeve with a male external thread and a smooth centre bore to take the counterbore pilot - sounds simple when someone else thinks of it!

I took some measurements, a good quality Goodridge banjo bolt with a rolled thread and mounted it in the lathe.  I used a parting-off tool to cut it down to 1mm shorter than the threaded hole in the caliper, then used a centre drill followed by a 6.3mm mechanic's stub drill to make the pilot bore down the centre.  This gave a really nice snug fit for my counterbore pilot.  I cut a slot in the top to allow installation and removal with a screwdriver.  The finished item: 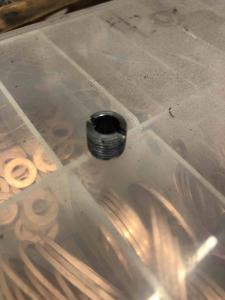 I then dismantled the caliper and split the two halves.  The single piston was removed and everything cleaned from that half before mounting on a heavy-duty machinist's right-angle plate on my pillar drill. I knocked the chuck out and fitted the counterbore - MT2 rather than chuck-fitting, which would be much more accurate - and after a lot of alignment checks and angle calculations made the cut. 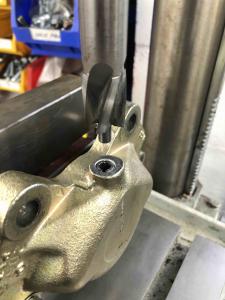 Everything was dismantled, the jig remaining in place for caliper number two.  Careful washing and reassembly came next, using new square-section O-rings for the caliper halves and ⅛" spacers (which the Merc doesn't use - stolen from a pair of Jaguar 16P/3 calipers, which do). 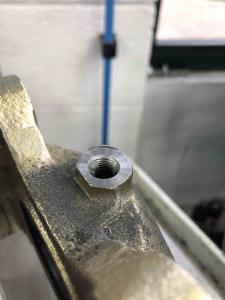 Note the slight concentric machining marks on the casting, which help the washer to seal.

I got some perfect sized copper washers from Beal, and made sure to anneal them before fitting with a MAPP torch.

So far, so good - 48 hours on and there's no leak showing either side.  Given the hassle I've had with this, though, I have a bag of Goodridge Stat-o-seals sitting on the bench just in case!

That's great news Roger, I'm glad it did the job.