Whilst waiting for a doorskin repair panel for the XK to allow the next stage of progress, and before I tear down the Land Rover's engine to rebuild it and do an unleaded conversion ready for next spring's Prologue Tour in Wales, I have stripped the brakes on the Cobra to replace my modern replacement bits with more accurate parts.  This took another few months of research (with yet more assistance from Dan Case - thanks again, Dan), but I think it's cracked now.  I have sourced the correct Girling flexible hoses, and imported a set of the correct Girling-style Cobra-specific brass banjo fittings which Nick Acton is now making small runs of in the States.  I had always been a bit suspicious of the advice I received a while back, i.e. that the front calipers for a 289 should be Girling Type 16P/3 as fitted to Series 2 E-types, as the dates just didn't quite stack up for me.  Whilst trying to get the hoses fitted correctly I was proved right as reference photos revealed a different hydraulic connection position for the Cobra compared with the Jaguar.  The main castings are almost the same, but not quite - and the machining is, of course, slightly different as a result.

Several weeks of quite difficult research finally revealed the best option.  The absolute, exact original specification Cobra calipers are not going to be found anywhere unless you are incredibly lucky enough to find someone preparing an original car for racing (for which most seem to have the Girling CR type caliper) who is prepared to sell the originals.  There is, however, an alternative which is so close it would take dismantling to tell them from originals.  This is an early 16P/3 (3-pot) caliper, which is an imperial caliper:  the only difference is that the banjo bolt to take the hydraulic connector is M10 1.0.  Standard M10 thread is 1.25, so the original-to-Cobra ⅜ UNF bolt will actually fit this caliper - but it's loose, and would be unsafe to use.  The part number and main casting number are different from the Cobra's - but the application number, stamped into the castings, is the same.

Needless to say, this caliper is also very hard to find - but not quite as hard as the Cobra version.  It dates from 1960 though, so I'm happy it's period correct.

They're away being electroplated before fitting the ⅛" spacer and final fitting, and I'll do a more detailed write up on all this later, but this will serve for now as a taster.

What were these alternatives originally fitted to Roger?

Obviously, these will only fit original-specification Cobra front hub carriers.  Most replicas use MGB or some other manufacturer.  The calipers are spaced ⅛" to fit over the original Cobra's thicker solid discs, whereas for the Merc they are not spaced.  ⅛" spacers are no longer available, but they were used in the equivalent E-type caliper and can be swapped over.  If push came to shove it wouldn't be hard to make some.  The small square-section O-rings for the caliper halves, and into the spacer, are quite hard to source, I've found.  A reducer sleeve is also needed to fit - the Cobra caliper bolts are 7/16" whereas the caliper mount holes are ½".

Here's a photo, now they're back from Big Redd's plating shop, and installed with the correct brass banjo union.  All the casting numbers are correct for Cobra.  This caliper was fitted to the front of 289s and 427s from the factory for street use. 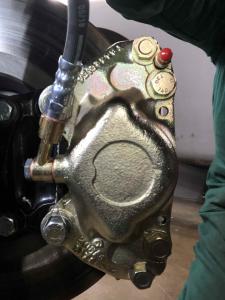 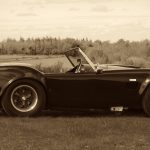 Should they not be Dull Grey colour?

Roger do you have a copy of the Girling Application list G320?

This post was modified 2 years ago by Mark Morgan
ReplyQuote

Hi Mark, I'd be interested to know what finishing process would give the dull grey colour.  Here is a front caliper on CSX2310, Dan's unrestored car: 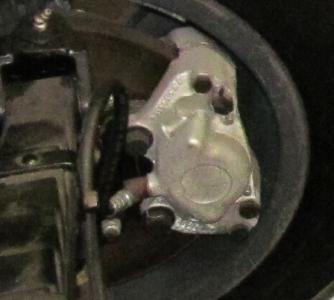 The exact Girling part number for a component will reflect any minor or detail changes as required by the manufacturer.  So whilst the castings for the SL Mercedes will be identical, with the same casting numbers, the part number under which the item was supplied will be different.  As noted in my posting, the 16/3 or 17/3 as supplied to Mercedes for a very brief period will have been machined to metric thread sizes (M10 1.0, very close to ⅜").  According to the Girling applications catalogue for 1961 on, the later Cobra part numbers are 64032770/1, whereas those for the Mercedes are 64032723/2.  My reference lists only AC Cobra from chassis no. CSX2201-on, July 1963-on.  I have no numbers specific to AC289 or 427.  The Mercedes numbers are for 1962-3.

From memory when i was looking into my brakes I did read something that dan Case posted about the process they used to use was no longer available to due the chemicals used back then, As normal he blew my brain with far to much detail!!   I did read somewhere about trivalent chromate plating a dull silver grey finish.. Much nicer (for this purpose) than bright zinc

If the calipers are metric they might be 16/3p (W)  What casting numbers did you get from Dan C? For some reason there is no listing for Merc in my Application guide and no mention of cast numbers..

Cast iron calipers (and many other parts) used to be cadmium plated.  Due to hazardous materials legislation, this is no longer legal in the UK so bright zinc, either yellow or silver, are the closest options.  I have never seen sixties calipers painted, but that doesn't mean they weren't.

As far as I know, all these had the same casting number, 20675, as seen here on one of Dan's calipers: 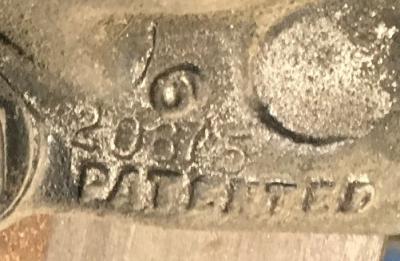 So, as said earlier, the Mercedes calipers have the same casting numbers showing.  The application number is different but that is manufacturer specific, and relates to how the casting was machined after production - i.e. metric threads for the Merc, imperial for the Cobra etc. etc.  The casting's the same.  Bolt spacing is 3½", 7/16" for Cobra but ½" for Mercedes.  The Merc caliper is built imperial but machined metric.

The rear calipers are 12/3P, used in several others - Ferrari, Iso, Maserati, Bristol and Jensen - my '73 Interceptor had the same 3-pot rear calipers with built-in handbrake mechanism.  Not the same as Jaguar.

I'd be interested to know what calipers your car has - are they still the originals?  Any chance of a photo?

As far as i can tell the rears are genuine, I bought a set of Jenson interceptor rears anyway as spares as they popped up for sale with correct hand brake mech and even have the single eared/lugged HandBrake pads..    As for the fronts i am not sure, one reason why i was at the time searching for info...  Knowledge on these Late cars isn't as well know as the earlier cars as you well know... They "look" correct but do not have the same part number that's in the 1962 onwards Girling app book i have and the part number doesn't not show up in there either for any car..

F&R calipers are a dull ish grey colour, but the brake pipe location is at the top not point forwards so could be Jag spec or other but when there is no info on exactly what was fitted by AC at that time i'm a bit lost.. I really need to go and look at another unmolested 289 sports..

Do you have any part numbers from your front calipers?  I've not seen a Cobra with the top mount banjo fitting - as far as I'm aware the top fitting was for the later E-type caliper.  My book does imply that they should be 64032770/1 for the later cars, but I don't know of any verifiably unrestored 289 sports which could be examined to check.

I am trying look into the early frua brake system photos to see if there was a change from the stated part numbers used by AC at the factory.. The ones i have currently look the same as i have fitted but i do not have the important rear/inner view..

Are you sure that 64320525 is a correct number?  It's not coming up on any of my Girling reference books, and not even on Google as 'Girling 64320525'.  The other caliper numbers all show on google.  It's not an E-type number - my books cover all E-type models from '61 - '72.  In fact it's not showing as a Girling caliper number for anything.  As you suggest, the outer view of the calipers is not much help as the outside cast half is the same casting (2-pot) for all these applications.  The difference is in the inner single-pot cast half - every AC Cobra and 428 application I have seen has the banjo fitting halfway up the caliper, not at the top.

Yes looking at my Mech photos the number is correct.. But i will have to go and uncover the car and recheck.. I agree the part number isn't coming up.. Only other option is that there "aftermarket-Pattern" parts... Either way... getting Originals isn't going to be easy unless someone is breaking up a Frua or has parted the brakes out for modern Upgraded units.. Just another Part to add to the list..