I see there's someone in Lancashire who is advertising a Kirkham 427 for sale at £300,000 on carandclassic.  The ad says these cars are 'identical to their original counterparts in every detail', but goes on to say that it has a 5-speed 'box, 'enhanced' suspension and braking systems, so not so much this one, then.

That said it looks very nice and it will be interesting to see how it does.  Time for another re-evaluation, perhaps...

That one belongs to Mark Edwards, he was at our barbecue last summer. There was another one advertised for £600,000.

You're kidding!  Surely not??? 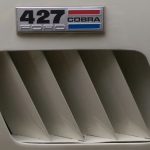 Odd isn't it but there a genuine 1966 on there for an extra £130,000, which isn't much to someone that could look at these sorts of prices anyway 🙂

Indeed, Dale.  I guess the seller's just chancing his arm - if someone's daft enough to pay it, they'll take the money.  Rather like a certain continental Daytona buyer, perhaps.  Have you been following that - do you know whatever happened to it?

The red car at £430k has an “interesting” provenance following the “repair” in the 70’s and it has exchanged hands numerous times as far as I can tell.

If it was a “no questions” genuine car, I can’t help but think it would be significantly more expensive. 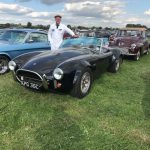 There's been continued discussion regarding that car on the ACOC forum.

It's something of a dilemma - at £430k, it's a relatively cost effective way of getting into a 'genuine' Cobra and the stretch over a Kirkham isn't a particularly big one, relatively speaking, but it would have to be a car that you'd want to keep because the questions over its origins would always limit the potential audience in the event of a sale and let's not forget that it's been for sale for a long time now.

Me personally?  I would still be inclined to buy it over a Kirkham, if the difference in price was 'only' £100k.

I think the current pricing of Kirkhams here in the UK does highlight the upward shift in the market for authentic 'replica's' and I say replica's in the true sense.  If you look at the limited number of correctly constructed Jaguar C and D types, plus GT40's in the current market, you won't find many, as the best ones sell quickly and do so for high values.

Tool room copies of historic cars are now an accepted and established part of the classic movement, much moreso in the last few years and they're now desirable and commensurately valued in their own right if the car is configured in a period specification and built using authentic original or correct modern parts.

I have never bought any old (or not so old) car as an investment and on many occasions have then suffered the consequences of that lack of forethought, but I do believe that my Cobra will prove a sound investment over time, as will any members cars here that accurately evoke an original Cobra.

And perhaps best of all; the more I use the car, it becomes more accurate as each day passes as it accumulates patina.

Speaking personally, I don't give a monkey's about the value.  I wish it was worth the same as a TR6 or even a Healey, say 30-60k tops, then I wouldn't be so bothered where I left it, what the weather's doing before I go out in it etc.  There's always a bit of me that's thinking I could have another project sports car needing lots of lovely welding and parts hunting for a fraction of the Cobra's value, which would be more useable and easier to live with.  The temperature gauge would still break, though.

I have to admit to looking at a couple of resto Healeys this month... and an Allard... but then I look at the Cobra and can't bring myself to do it.

I don’t see why it’s value has any bearing on how you use it personally.

A bit of dirt or patina isn’t going to make much, if any difference to its value. Whatever value it has is derived from the some of the parts and the quality of assembly, not how clean it is.

Yes it was and still is my car, there was a company selling the same car in London and I thought I'd chance it, even though I thought it had no chance! 😉 The car has been used and toured the UK and Le Mans Classic twice. Whilst the engine is out I've had new "silencers" fabricated and fitted a Kirkey bucket seat, I find the original seat rather high.

What's your engine Mark?  I'm contemplating getting an Alu side oiler for mine.

Clive the aluminium block certainly handles well kept cool in the scorching heat at Le Mans Classic 2016. Ive never driven a cobra with an iron block though! I’ve attached details, it’s a Robert Pond engine although I think he may have retired from the scene recently. Mark 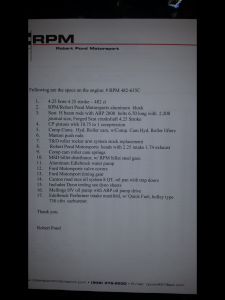 Thanks Mark, I'm thinking along very similar lines with an RP block - maybe stoked to 482.  Question, one view is that stroking might impair the responsiveness or the engine.  Any views?  Would you spec anything differently if doing it again?

Clive I really wouldn’t change a thing as it does the job I wanted, which was to have fun on a track and usable on the road. The Red Facet fuel pumps in the boot are noisy at tick over , I’ll be looking  at a remedy once back together. The engine came with a QFT carb ( Holley lookalike) which seems to run OK although I will ask the chap rebuilding the engine what his views are on them. Having said that it works and I don’t want to fall into the trap of spending unnecessary hard earned cash! I did that in 2015 🙂

It would be good to have a chat if that's possible Mark.  Not sure if this forum software allows direct messaging (I couldn't find it if it does) but 07803 797 135 is my contact number if you have time to chat some time.