Does anybody know how to identify the correct seal for a given Toploader tail and where best to source?

My current seal which has been weeping for a while is marked 1.5 x 2.5 x 0.375 but I want to be sure it’s the right one before replacing it. Also looking on Jegs or Summit I don’t seem to be able to find anything with these dimensions.

Have you tried David Kee Toploaders in the US?

Have you tried David Kee Toploaders in the US?

Good Lord, a login verification process.  Whatever next?

Anyhoo, unless something has changed recently you'll be lucky to get any response from David Kee.  I spent some months trying to buy a couple of his Cobra-spec toploaders, but simply couldn't get him to respond.  I even had a mate from the US Mustang forum go over to his shop to see what was happening - he found him, had a chat and David promised to answer my emails, which he had received.  Didn't happen, though.

There's several on ebay, may need to come from the US though, not a big deal.  You need to know how many splines on the output shaft, 28 or 31.  Do you know what car your 'box came from?  Could try Mustang Maniac, or one of the bearing suppliers:

Yep, only took me 7 attempts to login. I don’t want to criticise good natured intentions, but forums that make it hard to log on, generally don’t er....get many people logging on.

There was a time, when I was having the Toploader vs. existing T-5 vs TKO debate and was tempted by DKs new build, all aluminium Toploaders. He did respond, but like many US suppliers, wasn’t much interested in the effort of exporting to the UK. Just as well I guess. 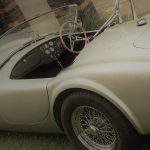 Sorry chaps we are being bombarded with fake registrations and attempts to hack into various accounts, these are generating hundreds of emails and I needed to do something.

I am limited on what I can do with the platform and this request for verification is unexpected and I see no way of removing it at the minute, this is happening on both the forum and main site do double the pain, bring back hanging!

@webmaster Okay, in this case I’m sure we all sympathise. I don’t know what the solution is. Very hard to remember all the passwords one uses, but get the point that the forum needs to be the preserve of paid up members.

I was incredibly lucky (I think that's the right word...) to contact Mike McCluskey when he was having a short run of original BW T10 transmissions made with the L gear set and aluminium casings.  Not sure about the 'lucky' actually, as the bill was truly eye-watering, but the gearbox is a work of art!

I had planned to fit a Toploader to my car before that opportunity cropped up.  By far the easiest 'box to fit is an HEH-E Toploader for a Sunbeam Tiger - they should all be close ratio (if memory serves - I sold my Tiger in 1984), with a tailcase that is the same length as the Cobra's T10 (and, I think, early Galaxies).  It will also put the gearlever in the correct position.  The real icing on the cake is that the Tiger 'box is also the correct narrow-case configuration, so you don't get the redundant extra 'ears' on the front of the gearbox casing that you would on a Mustang 'box.  This Tiger 'box will work beautifully in a Cobra with no modifications - and, of course, will work with the correct early 5-bolt bellhousing 289 - because the vast majority of Tigers had 260 engines, all of which were 5-bolt.  When I bought mine, they were relatively easy to find as a lot of Tiger owners were converting to 5-speed gearboxes.  I suspect it won't be too long before they're all trying to buy their gearboxes back, a variation on 'Stag engine' syndrome...

The commonly-available Mustang 'box has a tailshaft that is too long for a Cobra, and puts the gearlever in the wrong place. 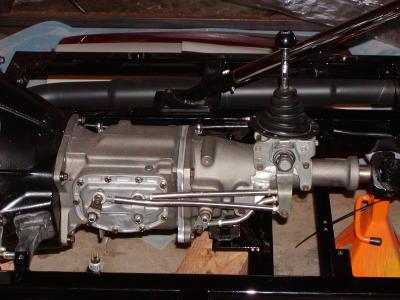 Nice looking box, dare I say and I do like the idea of using original spec parts, if the aim is to sample the period experience. However my car had a five speed T5 from the factory, so had no qualms in keeping that way. I wasn’t trying to make a 1960’s tribute, preferring to develop what might have been. So the TKO was the obvious candidate. It has 3 gear-lever positions and few know, that it can be ordered with a 1/2” shorter input shaft, which allows a correspondingly shallower bellhousing and a longer propshaft. It can also be made to fit the original chassis, without alteration. It’s also sweet as a nut, providing you don’t forget to dial it in.